The following is a ChoiceUSA cross-post.
------

The Archdiocese of Baltimore, MD has filed a lawsuit in federal court claiming a recent CPC regulation bill violates the right to free speech and religion. The regulation, which went into effect in January, requires all area crisis pregnancy centers to clearly display a sign advising potential clients that they do not refer for birth control or abortion.

If you fail to see any First Amendment violation in requiring CPCs to be up front about their services (or lack thereof), you are not alone. If anything, the lawsuit is a last-resort effort to restore the status of Baltimore-area crisis pregnancy centers to their previous cachet: a place where women can go believing they will receive comprehensive information when they will be handed anything but. How do these CPCs plan on deceiving massive numbers of women with bunk information and a complete lack of medical accuracy if there's a pesky sign that may clue women into what they're getting into?

Forcing medical professionals to perform and forcing women to comply with unnecessary and costly counseling and 'medical' procedures; forcing women to endure unnecessary waiting periods, and suffer through medically inaccurate and/or outright false information not to mention other restrictions is ok. Treating women of all ages as juveniles is also ok.

Requiring CPCs to provide accurate truth-in-advertising about the legal services it does not provide to avoid ensnaring women into a system that will lie to them is not ok?

If you were looking for yet another example of CPCs allowing their true colors to shine through, this is it.
Posted by Crisis Pregnancy Center Watch at 2:10 PM 1 comment: Links to this post

Abortion and Women of Color


The video, featuring Loretta Ross, is worth a watch.
Posted by Crisis Pregnancy Center Watch at 2:09 PM No comments: Links to this post

As a grassroots, non-partisan organization, CPC Watch has struggled to take a clear position on the bill itself. Our main organizers range, in political affiliation, from centrist to honest-to-god socialist. Our email discussions on the bill have been spirited but respectful. For that reason, we have never officially endorsed or supported any partisan effort to increase access to health care.

But if there's one thing we have been able to agree on, it's that this bill falls short. While we commend any effort, political or otherwise, to increase access to what many of us believe should be a fundamental right, we simply cannot pretend we're wholeheartedly pleased with the outcome of last night's vote.

While we understand the positive impact the regulations on insurance companies will have, allowing for more people with "pre-existing conditions" to purchase health insurance, we all feel a little slighted by the deal made between Bart Stupak and President Obama to ensure no federal money will go towards abortion care. What has been named a "deal with the devil" by some pro-choice groups seems, to many of us at CPC Watch, to be just another example of Obama backing down in the face of some very minor opposition. And while we recognize the importance of just getting a bill through, we feel this move will only further the belief that, when it comes to health care, abortion does not count.

In the words of our supporters:

I cannot pretend I was not at least a little happy to see something happen last night. Though comprehensive women's health was bargained away for a single vote, I know that women and families who could not previously be insured will soon be able to do so. Preventative care, contraception, pre-natal, and pediatric care will become a little less burdensome, and I suppose that's a start.
-Becca James, Outreach and Fundraising Coordinator

I am thoroughly disgusted by President Obama's actions. After months of looking up to him and believing that he would uphold his position against Stupak/Nelson, hearing he made a "deal" hit me hard. Thousands of women will continue to have their reproductive choices made for them by their financial situation. Any limit on abortion access is an attack on true Choice.
-Rosa, Blogger

The for-profit system is not benevolent. Simply creating the space for costs to go down will never be enough if insurance companies are not regulated, if they are not rivaled by a not-for-profit option. We have the ability to manufacture food and clothing for dirt-cheap, and yet people still go hungry and cold. Simply making things cheaper for corporations is no solution, and requiring tax payers to pay these private companies with no commitment to the well being of its customers is not going to fix the inherent problem.
-Lauren Guy-McAlpin, Project Coordinator

I feel that this is less a health care bill than it is a mandatory insurance bill filtered through the "decency police." Our country still seems sold on the idea that health care is expensive, rather than acknowledging the truth of the matter: The bulk of the expense is in the drugs or surgery that become necessary as a result of making bad health choices that are tolerated (or even encouraged) in our country simply because someone is making money off those bad choices. Those who are making the money form those bad choices will continue to make money through the bill as it stands now, and the bulk of our population will accept that such is the way it is. It is a complete failure in making the "change" that we need to make for our efficiency. As far as the Stupak thing is concerned, it's just another example of how some people are making things unattainably expensive by attaching their personal values onto public healthcare, yet these are the first people to scream and whine when taxes are raised for services that they can't deny that they themselves depend on. Wouldn't it be great if we could "pay" for this insurance on two different scales? The "I support abortion/ natural medicine/ home birth when possible" scale, and the "I put all my faith in western medicine and don't support abortion" scale, which would naturally be more expensive. If we could fill out surveys like we do when we're getting car insurance, then maybe there could be some fairness here. -- from my left brain. Mari Gallion, singlepregnancy.com 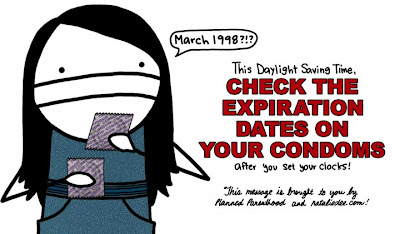 In honor of Daylight Savings, Planned Parenthood would like to remind you to check the expiration dates on your condoms. 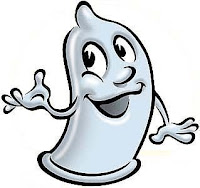 Condoms are very effective in preventing unwanted pregnancy and the spread of STDs including HIV, but only if used correctly and before the expiration date! I can attest: I'm 90% sure I got pregnant from an expired condom fiasco, and while I love my son more than anything in the universe, I'm lucky he was all I got from it and not an STD!! So cover it up, and make sure its outfit is in season.

(Click on Mr. Condom to learn how to put him on.)

Love,
Becca
Posted by Momma Bec at 12:53 PM No comments: Links to this post