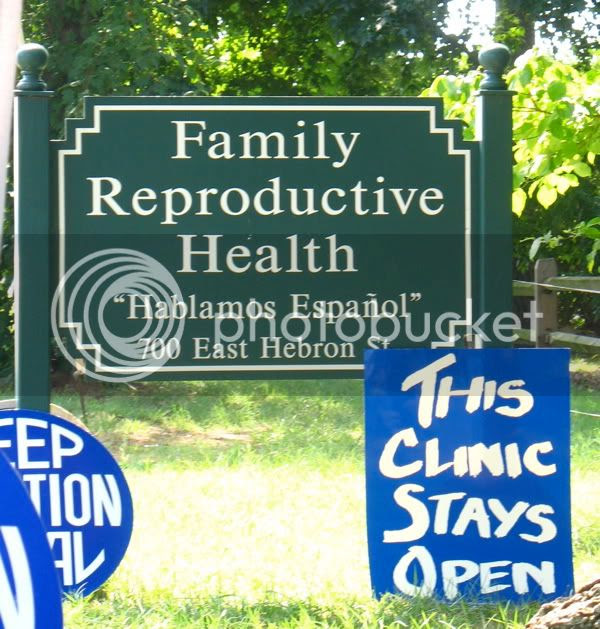 Posted by Crisis Pregnancy Center Watch at 9:09 AM No comments: Links to this post

Note from a former CareNet employee

The following was mailed to Cedar River Clinics in Washington State in October of 2009. It is reprinted here with permission from the Feminist Women's Health Center.

John Kerry said "You can be certain and be wrong." This is how I feel about myself after having worked in the prolife ministry for over 9 years for CareNet and their affiliate "prolife" centers as a software vendor.

CareNet doesn't feel this way. They heavily endorse an internet based company ekyros.com. Hundreds of their affiliate pregnancy centers use the internet based ekyros.com client intake software. These centers make clients think that their pregnancy history and other confidential information will never leave the room, then they turn around and enter it online and this personal information leaves the center and gets into the hands of ekyros employees.

I am losing my business because I will not change my software to send client data outside the walls of the center. A client already has enough on their mind. They do not need their right to privacy violated.

I don't care about losing my company. The client's right to confidentiality is more important than my business.

I only bring up the point to say that I worked for CareNet and their centers for years for 15 thousand a year and without health benefits and now my wife and I are going under. My wife is ADHD and her medicine is expensive. My situation has convinced me that CareNet and their affiliates don't respect the women who visit them. I know this because they had no respect for my wife and I even though we worked for them for years without medical benefits barely above the poverty line. They won't help the girls after they have their child and have proved this time and again. My situation just helped bring this fact home to me through personal experience.

The very name 'prolife' is deceptive, because it implies that pro choice is pro death. It is fringe prolifers that have murdered innocent people at abortion clinics.

CareNet and their prolife affiliates treated my wife and I like a non-person.

They don't do anything to help the young girls who visit them stay off welfare. These prolifers wash their hands when the child has to grow up in low income housing projects and does nothing to keep the child from turning to crime to support the household. In fact many voted for Bush who believes in tough prison sentences instead of providing educational and other programs to help ensure that these youth do not turn to crime in the first place.

Check out CareNet's financials. They take in millions a year. Their president and board members each make over 100,000 a year, yet they give 0$ back to their affiliates or to the girls they say they serve.

Ask a center who uses ekyros.com if it bothers them that they promise absolute confidentiality to the client and then place the client's information in the hands of the employees of an outside internet company. Ask them if they inform the client where their information is going? You will see that the client is a non-person to them and (in their eyes) doesn't even deserve the basic respect of asking the client whether they are comfortable with their personal information leaving the center.

All this is just to say that when the prochoice people say the prolife centers are deceptive and don't look out for the welfare of the client in the long run,
I know this to be true, BECAUSE MY WIFE AND I HAVE WITNESSED WHAT KIND OF HEART THESE "prolife" PEOPLE HAVE FIRST HAND.

The prochoice side is the side that really looks out for the mother and offers family planning and even works with the mother to have her child and looks out for her and her child in the long run if she decides to have the child.

The prochoice side is the side that is not deceptive and really treats the mother and others with respect.

Posted by Crisis Pregnancy Center Watch at 10:45 AM 2 comments: Links to this post

In our recent project to create a Google Map of all CPCs in the country (that will hopefully replace our typed-out list once we get it integrated), we've noticed a number of CPCs advertising themselves as something they're not. In more than a few situations, CPCs have created Google business listings and categorized themselves as abortion clinics. In other situations, they list "abortion services and referrals" and "contraception referrals" under their services. As we all know, crisis pregnancy centers by definition do not offer any of the above.

NARAL Pro-Choice America has noticed this tactic as well. Focusing primarily on SuperPages.com and YellowPages.com, NARAL has published a letter to these high-traffic internet business directories asking them to hold CPCs accountable for false advertising:

Our Letter to Superpages.com and Yellowpages.com

NARAL Pro-Choice America and more than one million of its members and activists across the country call on SuperPages.com and YellowPages.com to remove deceptive anti-choice ads that violate your terms-of-use policy.

We understand that you are probably unaware that the advertisers post misleading listings.

We are confident that you will agree that ads posted by anti-choice organizations under the category of "abortion services" violate your terms-of-use policy. These listings are clearly "purposefully deceptive," "false, misleading," and "fraudulent."

We ask that you remove the material immediately, and protect the millions of people who rely on SuperPages.com and YellowPages.com every month to provide accurate information.

You can add your name to the letter here.

CPC Watch does not have nearly the capacity of large-scale organizations like NARAL, but we are still doing our part to help keep high-traffic business directories free of deceptive advertising. Through our Google Maps Project, we are informing Google of misleading categorizations and false statements about provided services. But we still could use more help.

What can you do? For starters, help us alert Google that their listings are inaccurate. Here's how:
You can also help us continue to build our Google Map. With the map, people who view the Google business listings for an included CPC will see that the center is in a map called "Deceptive Health Centers." If they choose, they can click over to our website and read about CPCs, then decide for themselves if they wish to utilize their services or look elsewhere for reproductive health care and counseling. View our progress here!
Posted by Crisis Pregnancy Center Watch at 1:08 PM 3 comments: Links to this post

I have used reports from MNT to dispel the myths of purported "health consequences" of abortion and contraception from a fully scientific standpoint, which is why I was shocked to see this article published last week:

My first reaction was to panic; I've been arguing the exact opposite for years now, citing studies from highly respected medical organizations, fact-checking every last bit of new information on the topic, often using MNT for just that. As a women's health advocate, this was big news for me, news that I needed to spread.

Then I read the article.

The study in question was published in April of last year and has already been refuted or point-blank ignored by a number of medical research groups, the main reason being methodological inconsistencies and poor data interpretation. Technical writer Joyce Arthur explains:

The anti-choice movement has been touting a 2009 study (Dolle at al, Journal of Cancer Epidemiology, Biomarkers and Prevention) that concluded that abortion raises the risk of triple-negative breast cancer (TNBC) by 40%. However, they never mention that this is a rare type of cancer that typically strikes women under 40 years of age. Because TNBC makes up such a small subset of all breast cancers, the overall conclusion that abortion does not lead to breast cancer has not changed. As Kathi Malone, one of the study authors, stated: “The weight of scientific evidence to date strongly indicates that abortion doesn’t increase the risk of breast cancer.”

Even the reported 40% increased risk for TNBC needs to be treated with caution. The statistical adjustments the researchers used to arrive at that figure may simply be an error caused by not accounting for all possible factors that might be contributing to the increased risk. The abortion data was apparently not adjusted for important factors like income or education. Further, to put things in perspective, a 40% increase in risk is not considered substantial in the field of epidemiology — a woman’s risk of getting breast cancer increases by 200-300 per cent if her mother had breast cancer.

Statistical misinterpretation, poor sampling, failure to recognize other risk factors... not at all unusual for studies on the topic that "prove" a link between abortion and breast cancer, but that hasn't stopped anti-choice organizations such as the Coalition on Abortion/Breast Cancer from using it to push their agenda. The MNT article quotes the Coalition's president, Karen Malec: "Although the study was published nine months ago ... the NCI, the American Cancer Society, Susan G. Komen for the Cure and other cancer fundraising businesses have made no efforts to reduce breast cancer rates by issuing nationwide warnings to women."

Additionally, the Susan G. Komen Foundation published a highly comprehensive table on a number of studies regarding the purported link, examining the methodology and findings, still concluding abortion is not a significant risk factor.

So why is Medical News Today exhibiting such poor standards on research reporting? It truly escapes me, but I might have lost my faith in a news source I once respected greatly.
Posted by Crisis Pregnancy Center Watch at 11:01 AM No comments: Links to this post

Did You Know? Many CPCs have what they call "earn while you learn" programs to ration the baby supplies they often advertise as "free." These "learning" opportunities occasionally take the form of parenting and infant CPR classes, but the vast majority of them are Bible studies and other religiously-oriented activities, even though most CPCs claim to offer assistance "regardless of faith."

Posted by Crisis Pregnancy Center Watch at 10:59 AM 2 comments: Links to this post