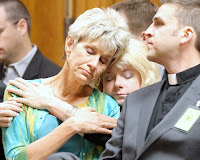 After an exhaustive hearing, Judge Warren Wilbert gave Scott Roeder, the man who murdered Dr. Tiller last year, the maximum sentence of life imprisonment with parole eligibility after 50 years. The judge tacked on two additional years for assaulting the men who tried to stop Roeder as he was making his escape.

The judge could have given Roeder the lesser sentence of life imprisonment with parole eligibility after 25 years, but the District Attourney pushed for the "Hard 50" on the grounds that the crime was especially heinous, was committed in a church, and the fact that Roeder had stalked Dr. Tiller for over 15 years.
Posted by Momma Bec at 8:18 AM No comments: Links to this post

Four Year Old: 'It's important not to kill doctors.'

I'm sitting in the play room with my four year old son, arranging blocks into towers and catching a glimpse of the Roeder sentencing every few minutes. My son, always inquisitive, wants to know what it's all about and why I'm watching it so closely.

I explain to him, "There was a doctor in Kansas. A doctor that was one of the few doctors who knew how to do a procedure that helps women. And this man didn't like what the doctor was doing, so he shot him."

"Yes. He did. And now they're trying to figure out how to punish the man who shot him."

My son thought for a moment. Then he said, "Mommy, I think it's bad to kill people. But I think it's important not to kill doctors. If you kill a doctor, who will help people?"

If only this sweet little boy could have understood the weight of what he had just said! As a mom, I understand that young children cannot possibly comprehend the weight of reproductive choices. I plan on explaining it to my son one day. But right now he's four, and I cannot explain to him exactly what Dr. Tiller did or why it was important. But still, his words were spot on.

The State of Kansas addressed this very issue in the court proceedings: that Scott Roeder's actions were meant not only to kill Dr. Tiller, but to deplete the number of later-term abortion providers in this country by a third. The number of women and families who needed Dr. Tiller's care face even greater obstacles now after his assassination more than ever before.

There are so few in this country who are willing to sacrifice their lives to provide women with one of the most difficult choices they'll ever make. Dr. Tiller knew, I believe, that his life would be ended at the hand of an extremist such as Roeder. It is that life he led that is keeping others from taking his place, and Roeder likely knew that.

Killing anyone is a heinous act. Killing someone who provided so rare (yet so imperative) a service as Dr. Tiller is something else entirely.
Posted by Momma Bec at 11:31 AM No comments: Links to this post